I remember my first Demo Disk. I went to Pizza Hut with my grandmother.  It was one of those ones where you walk in and eat. There were a bunch of discs in a container. Right next to the tip jar. They let me take one. I didn’t have a Playstation yet. I still took the disc though.  I still can see the case it came in. Five titles and a picture. The mystery of what these games are. A little while later I got one. I’m not sure if having the disc affected the families choose in buying one. It probably didn’t.  Right away though I put the demo disc in first.

I was greeted with options I never had before. I could play the first level of Tomb Raider. Or the First Level of Ape Escape. I was overwhelmed.  I must have played the warehouse level of Tony Hawk hundreds of times. The Pizza Hut demo disc probably got more play time then most of my other games I owned. 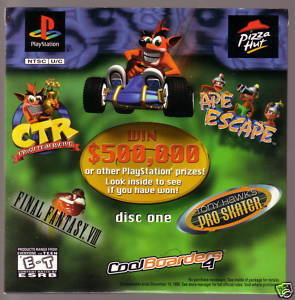 Demo Disks never featured just one demo. There was always more than one game. Which was amazing for giving players new experiences. I never thought I would have been a Tony Hawk fan. There I was though. Playing the same level over, and over again. I was only five though. So I couldn’t really get more than 2 games I year.  When Christmas came around though I got Tony Hawk and Spyro.

Demos now release over the PSN, Xbox Live, E-Shop. You don’t need a disk anymore to player hundreds of demos. Maybe though that’s too many options. Maybe receiving the disk made the demos special.  If you give customers a disk they will probably try all the demos. How many people could you introduce a Resident Evil 7 or Nier Automata to if you included it on disk with NBA 2k17 demo.

Some Demos still get big though thanks to word of mouth. Just look at P.T. One of the most talked about games that year. Or the Prey demo. Which was pushed really well. Had great word of mouth. The demo also featured an hour of gameplay. It honesty sold me on the game. Then theirs multiplayer demos. A Splatoon Splattest is only up for a weekend. So they become these big events. Demos still work. Most games just don’t release them anymore.  For good reason. Teams shouldn’t have to take precious time to make a demo if they don’t want to.

Demo Disks used to work. Maybe they could still work. By having the disk available in stores. It entices people to pick it up. How many more copies of Nier could have been sold. If it was next to the counter of Gamestop, or if the demo was on a disc with Prey. A couple more copies of Nier being sold is a pretty noble goal I think.