Butterfly Soup is a visual novel developed by Brianna Lei. It’s about gay Asian girls playing baseball and falling in love. Butterfly soup is also the funniest game I played this year. It’s also very sweet and warm. Its 3-4 hours long and its FREE. Go play it there’s no excuse not to. Then come back and read what I have to say about it.

I actually don’t have much to say about it. Butterfly Soup lets you play as 4 girls who are friends. The game switches protagonists as you play. This is really effective so the player each gets a moment inside their heads. You first play as Diya and we get to understand her anxiety. Each girl has a problem that is not obvious from just speaking to them. It helps us learn and empathize with them.

The game also exists in a specific moment. It take place in 2008 right before and after Obama is elected. Which doesn’t seem that long ago. It also doesn’t seem like it would affect this story about high school kids. It does in some small ways. One reason it probably exists in this specific time is maybe it’s when the Brianna went to high school. This game has a clear voice so that would make sense. 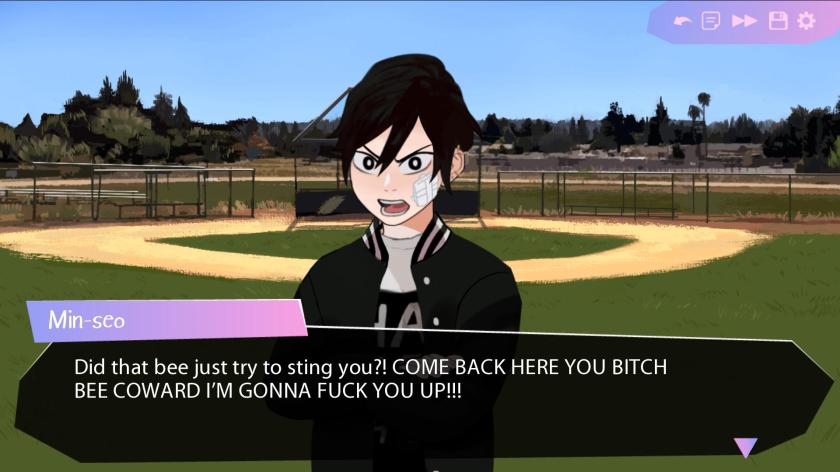 The other is something with Diya. The game takes place during a time where she’s coming to realize she’s gay.  She’s unsure of her feelings while her friend Akarsha already guesses Diya’s gay and knows shes bi.  Akarsha as a character is extremely online.  2008 was a time when I feel like high school kids were just becoming more online. Diya has a chat room, but it’s just her and friends. But kids can go online now and see LGBT circles. Before Diya realizes she was gay we see a protest. Its a protests against something LGBT related. I don’t know how it was for Brianna, but all I knew about gay people in 2008 (when I was also young) was people being against them.  Which would make it harder for someone to realize something about themselves. 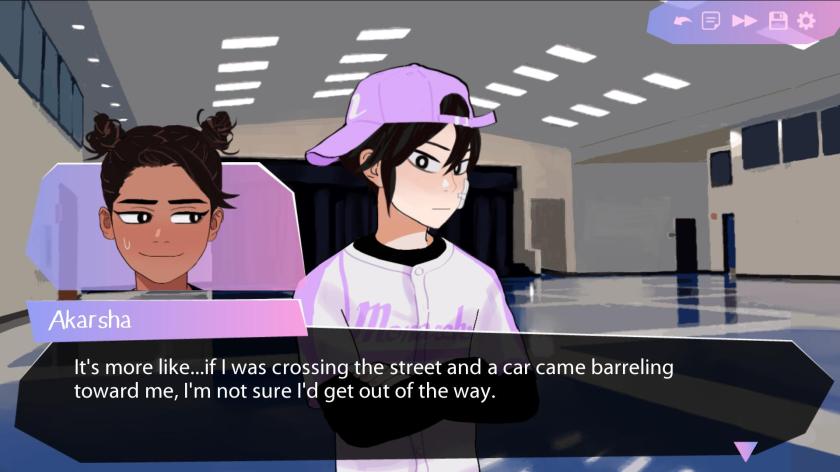 Let’s go back to Akarsha. Akarsha is good. I love Akarsha. Best written High School student ever in a video game. Akarsha goes around makes inside jokes that no one gets. Wears a ski jacket and sandals. Makes jokes to hide how depressed she is. There’s a moment where Akarsha talks to Min about her depression. Her description of herself and her feelings were almost word to word what I used to describe my depression. Which leads me to how well written this game is. This and Night in the Woods has some of the most naturalistic dialogue in a game.  These characters speak like teenagers. With every conversation you see how they have been friends for years.

The game ends with a message saying I really miss High School. I don’t know about you but I hated High School. But for a moment I understood why someone would miss it. The Persona games make me sad sometimes. They make me imagine a high school life that could have been. Butterfly Soup made me think about the moments in high school that were alright. The moments talking to friends on Skype or hanging behind the library. I don’t miss high school but Butterfly Soup made me remember those good moments.

Butterfly Soup does what it sets out to do perfectly. It wants to tell you a 3-4 hour story about 3 gay and 1 bi girl at a moment in their lives. It wants us to feel for them and laugh with them. Out of every game I played this year this one had the best execution. If you read this and still haven’t played it go. Its free and think about buying the 30 page art book for 5 dollars.